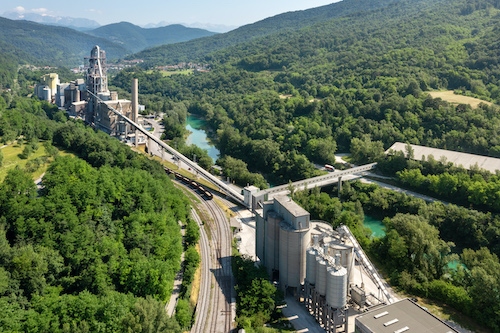 The Slovenian cement manufacturer Salonit Anhovo announced on Wednesday that it is planning to set up a solar power plant and hydrogen production technology with the help of local power producer Seng.

Salonit Anhovo already signed a deal in July with the Slovenian energy company Interenergo for the construction of a 2.23 MW solar plant on the rooftop of its cement plant in the western part of Slovenia, near the Italian border, by May 2022. However, the cement manufacturer now plans to add a total of between 5-10 MW of solar capacity and storage by 2025 as part of its commitment to lower its carbon footprint by 15% by 2025 and achieve zero emissions ten years later.

The company has therefore partnered with Seng, which is owned by the utility HSE and focuses on hydropower production, to study the possibilities of “building an additional solar power plant in combination with the production of hydrogen from renewable sources,” said Salonit Anhovo in a press release, without providing any further details.

“Apart from batteries, hydrogen is the most important renewable energy storage source, and it will also play an important role in decarbonising industrial processes. Salonit Anhovo sees the possibility of a further breakthrough in the field of decarbonisation through the introduction of technologies for capturing, storing and processing CO2, where hydrogen plays an important role,” it added.

Large consumers of energy see self-production as a way of reducing their reliance on the market, where prices of electricity, gas and carbon have recently soared to record highs. The day-ahead baseload prices for delivery on 9 September was EUR 133.60/MWh on the Slovenian BSP power exchange. The front-month Dutch TTF gas contract reached its own record high of EUR 55.55/MWh on Wednesday, while the Dec 21 EUA peaked at EUR 63.35/t.